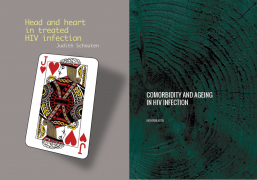 Friday January 27 2017 two AGEhIV research-physicians, Judith Schouten and Katherine Kooij, successfully defended their PhD-theses. The day prior to their PhD defenses unexpectedly considerable media attention was given to the results of the study, such as during the Dutch public news broadcasting agency (NOS) evening news. On the one hand, we were grateful for the attention our study received, as this creates general public awareness for the problems experienced by, and the importance of proper care for people ageing with HIV. On the other hand, we have noticed that the picture painted by the media has raised questions by some people living with HIV who could not identify as being representative of our study population. We of course want to take these people’s feelings seriously and therefore would like to provide some nuance and clarity concerning the design and results of our study.

Six years ago we initiated the AGEhIV study. All people with HIV aged 45 years or older who were receiving care at the outpatient clinic of the AMC could be asked to participate in our study. Of all those that agreed to participate over 80% were men, of whom most acquired HIV via sexual contact with men. Women are therefore for example less represented in our study, similar to the male-to-female rate seen in the overall population living with HIV in the Netherlands. For our control group we searched for people without HIV who on average as much as possible resembled our study participants living with HIV. As most of our participants with HIV acquired the virus via sexual contact we chose to recruit the HIV-negative participants at the STI clinic of the GGD and amongst men already participating in the existing Amsterdam Cohort Studies for men who have sex with men. During the recruitment of people who were willing to participate as control-subjects we made sure that they matched our HIV-positive group as closely as possible concerning age, sex and country of origin. It is therefore possible and quite understandable that some people living with HIV do not recognize themselves in the population we studied, and our results may therefore also not be readily translatable to all people living with HIV. The latter is for example also the case for people in whom HIV was diagnosed and treated relatively quickly after infection and in whom severe immune deficiency has been prevented. Such people are relatively less represented in our study population.

The AGEhIV study, amongst others, assesses the prevalence of and risk factors for ageing-related illnesses (such as cardiovascular diseases, neurological impairment or osteoporosis) in people living with and without HIV. An important result of our study is that the ageing-related illnesses which were studied do in fact occur more frequently in the group of people living with HIV in comparison to the group without HIV, but with the difference between the groups in general being smaller than what had previously been reported or suggested. In all cases it was clear that known risk factors such as smoking, high blood pressure and high cholesterol, which were more prevalent among our studied group with HIV, could partially explain the difference. In addition, those that suffered from prolonged severe immune deficiency in the past had a greater risk of developing ageing-related illnesses. The results of our study also suggest that mechanisms underlying ageing in the body could play a part in this. So far, however, we have not found any evidence suggesting that the process of ageing is accelerated in people living with HIV that are treated adequately for their infection compared to our control group.

From these results we can assume that not smoking, generally living a healthy life and treating factors such as high blood pressure and high cholesterol can favorably contribute to preventing ageing-related illnesses in people with HIV, similar to what is the case for people without HIV. There is no reason to assume that this is not also valid for people with HIV who were numerically less represented in our study (for example women). In addition, early diagnosis and treatment of HIV are important in further reducing the risk of ageing-related illnesses. Moreover, early start of treatment also contributes to preventing HIV transmission and thereby reducing the number of new HIV infections.

Most of our study participants are currently between 50 and 60 years of age. In order to obtain a more complete picture of what it means to age with or without HIV, it is of paramount importance to be able to monitor our study participants until a more advanced age. This will hopefully improve the awareness and knowledge on this matter in people with HIV themselves, of healthcare workers, and of the general public. Hopefully this will contribute to an (even) better level of care and to more knowledge about how people with HIV can age resiliently.